“For visual artist Deanna Musgrave, art and healing are interwoven. This is why transformation is the crux of her work and the reason she found home in Saint John, [New Brunswick], a historic working-class city on the Bay of Fundy. This place possesses energy she describes as having “an ancient quality that brings together polarity.” It is polarities that inhabit Deanna’s vision. Her work is an interaction that seeks unity, exuding energy in the process, much like the current transformative renaissance happening here in the old port city.” (1)

“[Her] work has been a fixture in the Saint John and New Brunswick art community for over a decade. Her paintings are immediately recognizable; ethereal and vibrant, they encapsulate traits that many artists struggle to balance. They are objectively beautiful yet wrought with complex symbolism and capture a narrative while remaining vehemently abstract.” (2)

"Often working on the studio floor, using liquid paints to surround, unify and pool around areas of information, Musgrave succeeds in defying a traditional concept of perspective. Her compositions unfold almost three-dimensionally, enveloping the viewer with information from above, straight on and below." (3)

“Water is the starting point for each of Musgrave’s works. With a blank canvas placed on the floor of her studio, she selects objects of significance: of sentimental, aesthetic, or symbolic meaning, to place on top of the canvas. She sprinkles, sprays, or pours water over the object to capture an impression of the form in pigment. The impression made by the water is like a memory of the object on the canvas.

Using water in the process is as important to Deanna as her subject matter. Her world view is closely tied to the power of water and its relationship to experience and memory. Deanna’s work considers and articulates the theories of homeopathy: the ability of water to remember substances once mixed in it; cymatics: the patterns formed when a substance like water or sand is vibrated; and akashic field theory: the theory that information can exist and be transmitted through energy fields.

The result is a highly dynamic and fluid expression of memory, story, and a deep connection to water. Outside of her art, Deanna studies and practices dowsing: practiced since the 15th century to locate underground water systems. More recently dowsing has been adapted to locate areas of stress or trauma on the human body as a means of healing.”

All aspects of Deanna’s connection to water speak to a single idea: that information, knowledge, and experience can exist and be transmitted in many different ways. She believes that revolution can be ignited from person to person and that can happen in many different forms.” (4) 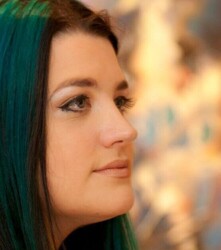 Deanna Musgrave
Saint John, New Brunswick artist, Deanna Musgrave, is best known for her monumental paintings and public artwork such as, “Cloud” (2015), which is part of the collection of the University of New Brunswick; displayed at the Hans Klohn Commons building in Saint John, and measures 10’ high and 56’ long, as well as, “Nest” which covers the entire pedway between Saint John City Hall and Market Square. Her most recent public artwork, “Mirror” (2019), was unveiled at the Carleton North High School in Florenceville-Bristol and includes two back-to-back 6’6” circular paintings. Her work “Tropos” (2011/19), which measures 8’ high and 48’ long, recently found a permanent home at the University of New Brunswick’s (Fredericton) new Kinesiology building.
Musgrave has had a solo exhibition of her works in each year since her graduation from the Mount Allison Fine Arts program in 2005. Early on in her career, she was selected by the Beaverbrook Art Gallery in 2007 for the Studio Watch Award aimed at introducing promising new artists to the public and later included in “Off the Grid: Abstract Art in New Brunswick” at the Beaverbrook Art Gallery in 2014.
Musgrave is devoted to researching when Art is the Healer™. She completed her thesis titled “Connecting Crossmodal Interactions in Visual Music to create ‘Mindful’ Experiences” as part of her Master of Interdisciplinary Studies at the University of New Brunswick. She is also trained in consulting hypnosis and various forms of energy healing which she utilizes to assist clients and create art. Through her part-time position as artist-teacher of collectionArtNB’s “VanGo!” program, she visits schools across the province to share the art collection and lead students in workshops focused on what she terms “Mindful Guided Art.” She looks forward to continuing to research and share how intuition, empathy and healing can be developed and enhanced through transformative art.
Musgrave’s research passions also include the connections between art and music, which she lectured about at Mount Allison University’s Brunton Auditorium, as part of the Sackville Early Music Festival in the fall of 2018. Her art openings often involve musical collaborations with the musicians and composers of New Brunswick.
Her work has been enthusiastically reviewed by the New Brunswick media, and she has won numerous grants and awards from the New Brunswick Arts Board, Mount Allison University and the University of New Brunswick. Her work is featured in many public collections. 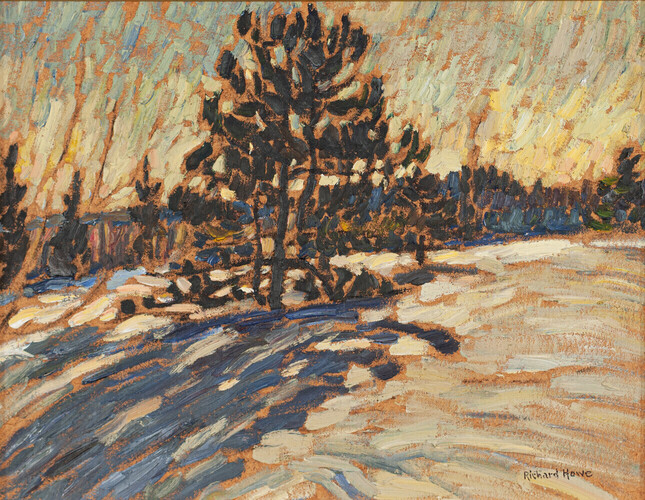 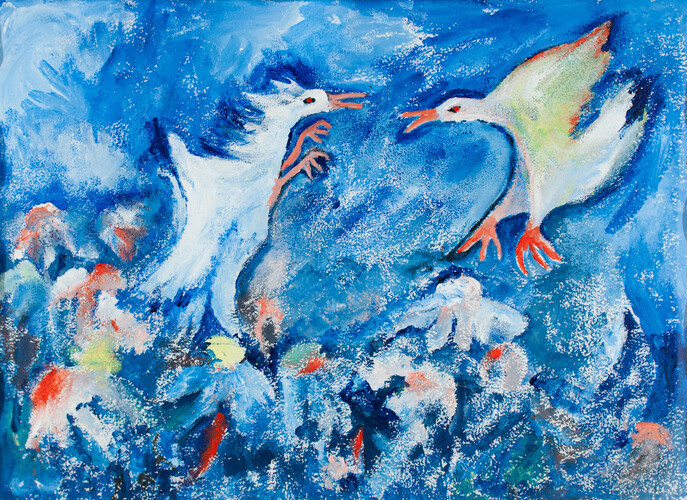 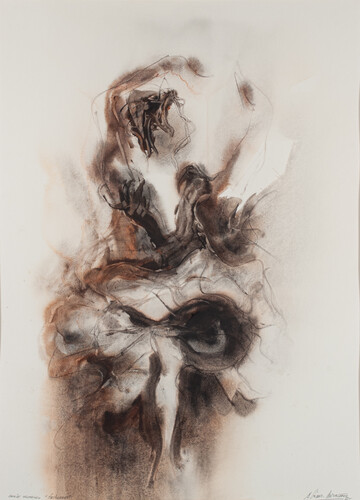 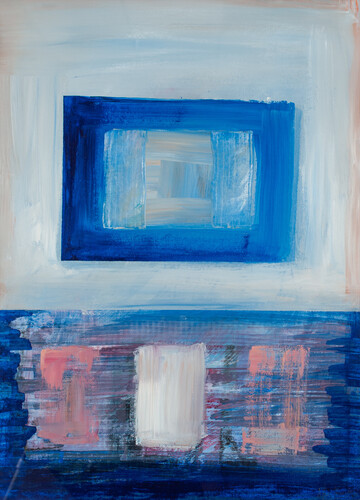 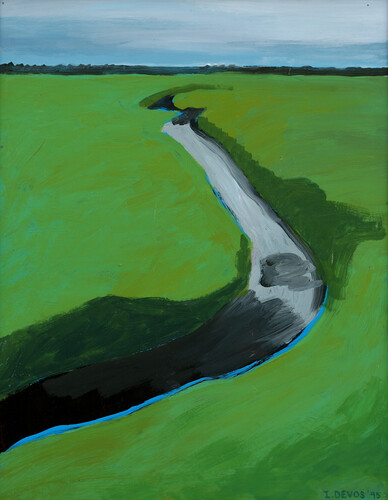 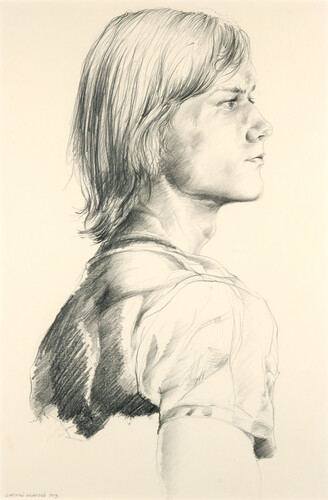 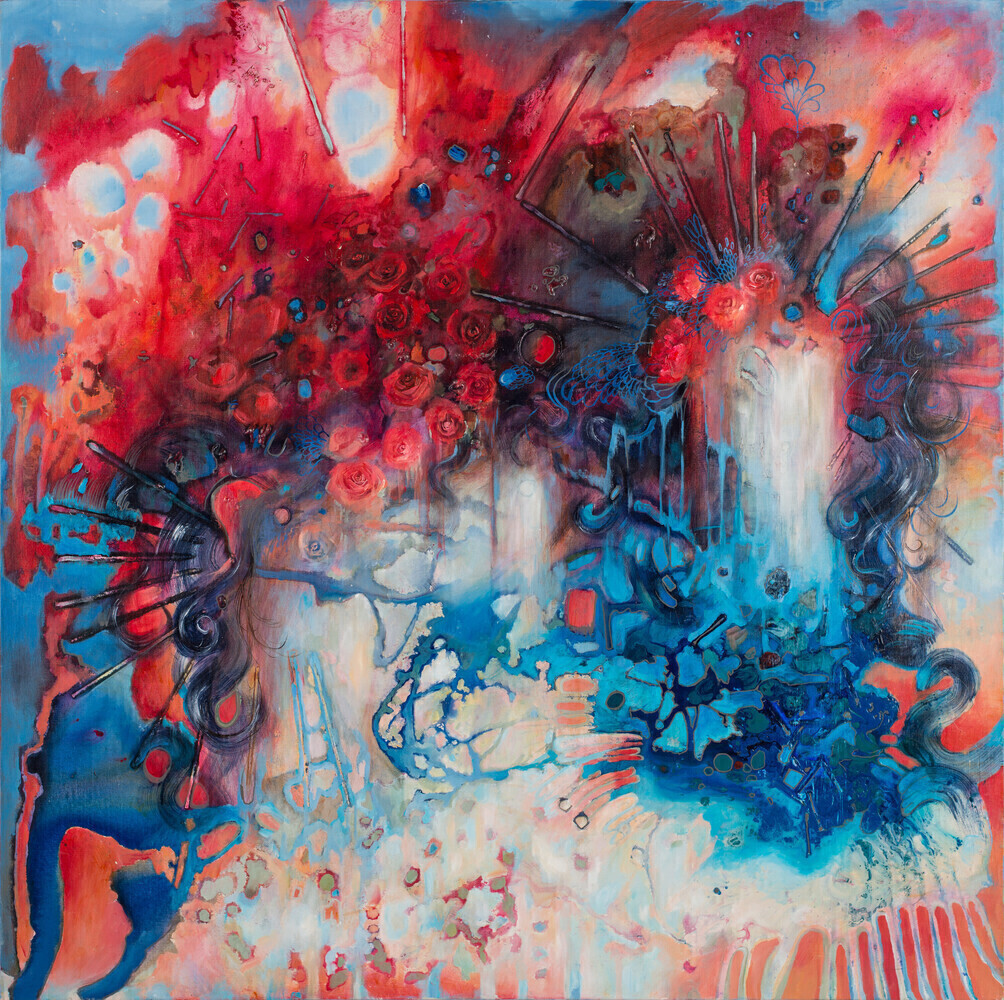